Start a Wiki
Joshua Thomas Cuthbert was born on July 28th, 1992 in Porsmouth, England. His primary school was Cranbourne and his secondary school was Charters. He is from Winkfield, and he's the second youngest member. He is known as the loudest and he's known to swear, but the boys also say that Josh is the most romantic.

Before the X-factor, he worked in an office and starred in the west end musical Chitty Chitty Bang Bang when he was 14. His nan spent £800 on tickets and she went every week! He used to be a talented football player, but he lost half of his thumb and never returned to it. In 2009, he was invited to join The Wanted but was unable to because of a two-year contract with the band Replay.

He has a cat called Oreo, who took part in his Twitcam. He once had food poisoning and had to stay in bed for over 36 hours. He can also sing Hero in Spanish.

His dream date would be with Frankie from the Saturdays despite the fact that he claims to like blonde, blue-eyed girls. In the past, he has had a crush of Jade Thirwall from Little Mix and currently has Kelly Brooke as his celebrity crush. 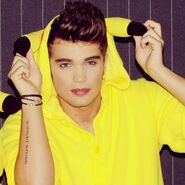 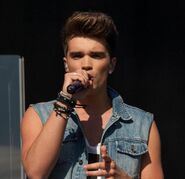 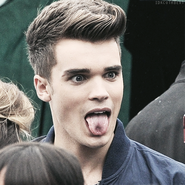 Add a photo to this gallery
Retrieved from "https://unionjworld.fandom.com/wiki/Josh_Cuthbert?oldid=7210"
Community content is available under CC-BY-SA unless otherwise noted.