Jaymi Hensley was born on February 24, 1990 in Luton. Before the X-factor, he did both ballet and gymnastics. His career as a gymnist was cut off by breaking his wrist, and struggled with his weight when he was no longer exercising so much.

Auditioning with Triple J was not the first time Jaymi has tried out for the X-factor, but by far the most successful. Jaymi claims that George is one of the best things that happened to Triple J (other than getting through their first audition of course).

His sexuality was also something that was going against him, and he came out to his family when he was fourteen. With the full support of his bandmates and mentor Louis Walsh, he came out to the public on the eighteenth of November, 2012. He is currently engaged to Olly Marmon, and planning a wedding for early 2015. He goes by Jaymi, but his full name is James William and he is left handed. He is the second oldest of Union J, only behind JJ. The boys describe Jaymi as the mother of the band because he wakes them up and keeps them on schedule. On The X Factor, he's known as Bossy Spice.

Once JJ came back from a spray tan with only a gown and him, George took it and JJ was left on the balcony naked! Jaymi said that out of the members he would date Josh because he has strong eyebrows. Jaymi has a dog, a cat, and two fish. In an interview, he told The Sun that he was gay and he has been out since he was 14. 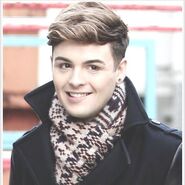